Hawaii’s 2018 Eruption: Details on What Has Happened So Far

One of the most fascinating and well-covered eruptions in Hawaii's recent history began in May of 2018 on Kilauea Volcano. Kilauea has been continuously erupting since 1983, but the recent change in activity has lead to a firestorm of publicity that has captivated science-enthusiasts around the world. The 2018 eruption is having little to no impact on the majority of the Big Island, but areas in the Puna District adjacent to and downslope from the eruption are being threatened by the newly opened lava fissures. The 2018 Hawaii eruption is similar in many ways to past periods of increased acitivity, including another eruption in 2014, but the 2018 eruption broke ground within the community of Leilaniu Estates, and has been accompanied by unusual eruptive activity 15 miles away at Kilauea caldera.

The first signs of the new eruptive cycle began on April 30, 2018, when the lava lake at Pu’u O’o, an unusually active and long-lived side-vent that formed in 1983, rapidly drained away. The lava cone at Pu’u O’o, once filled to the brim with a lava lake, suddenly became a hollow dome with a giant central pit more than a thousand feet deep. Seismic activity indicated that the lava had drained into underground magma chambers and was migrating downslope along Kilauea’s Northeast Rift Zone, a long underground crack that tends to be the focal point of new lava outbreaks.

Lava was searching for a weak point to bubble up to the surface. The movement of magma underground lead to the formation of cracks in the ground in Leilani Estates, an indication the lava was approaching the surface in that area. (The following webcam image captured the lava lake in Pu'u O'o rapidly draining in only a few hours in 2011) 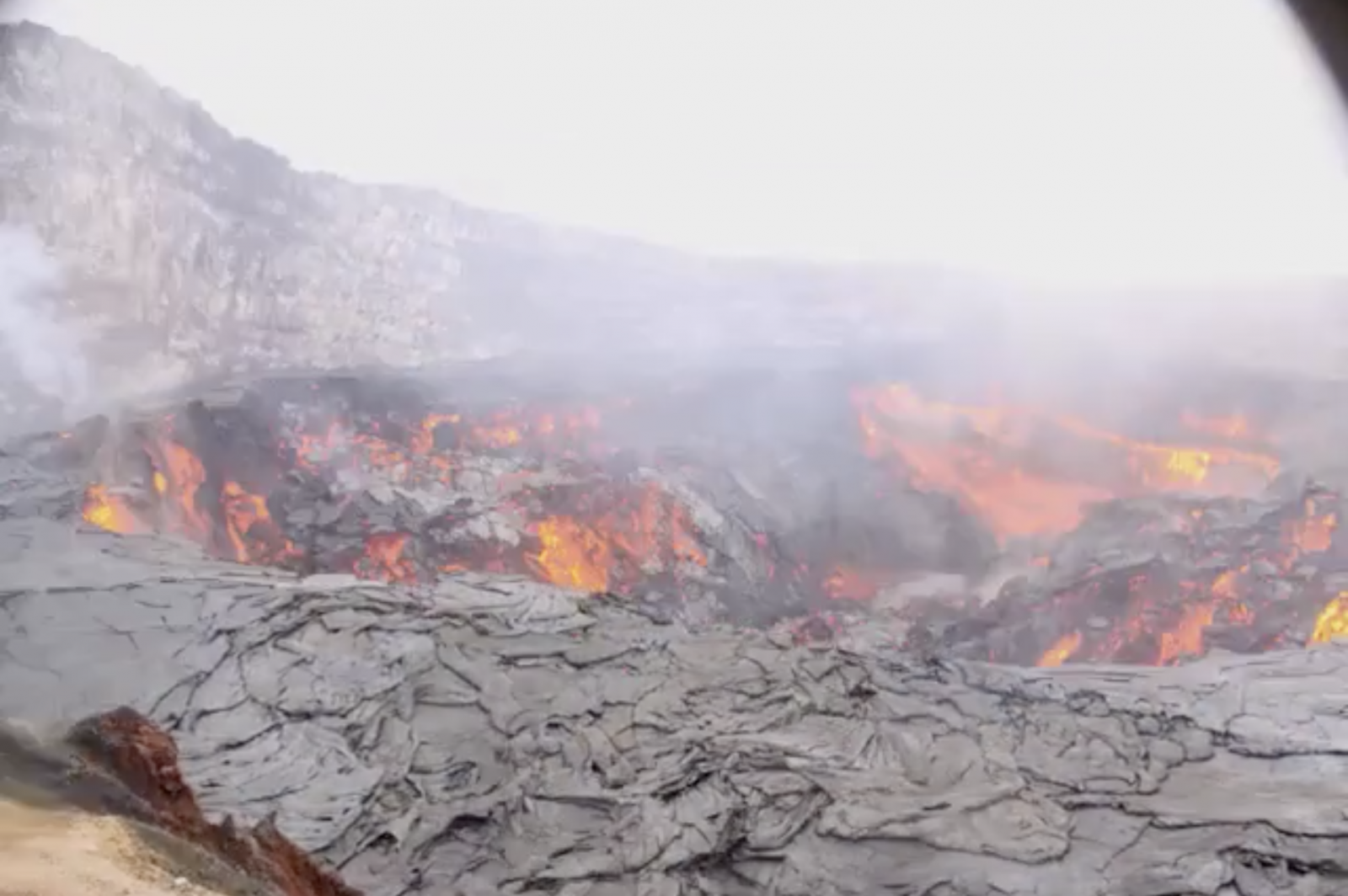 On May 3, lava first broke the surface from Fissure 1 near the eastern edge of Leilani Estates. Some of the fissures ceased producing lava after only a few hours, but new fissures began opening up, and at times nearly all the fissures were erupting lava simultaneously. From above, the eruption looked like a chain of lava fountains surrunded by an ever expanding area of black lava.

New lava outbreaks occurred as fissures continued to split open the ground along an axis that backtracked through additional areas of Leilani Estates as well as areas to the northeast. As often happens during Hawaiian eruptions, the lava began to localize to a smaller area - in this case, the lava production dramatically increased in the vicinity of Fissure 20, a newly formed vent located about a mile northeast of Leilani Estates.

The high volume lava flows from Fissure 20 rapidly traveled downhill towards more isolated areas of the Puna coastline due to steep terrain. Two fast-moving streams of orange lava traveled more than three miles and reached the ocean on May 19. By late May, the primary lava source became Fissure 8, a rapidly developing volcanic cone that formed in the backyard of a home only a few weeks before. Lava from Fissure 8 travelled a different direction, eventually covering the town of Kapoho on the eastern tip of the island in early June. 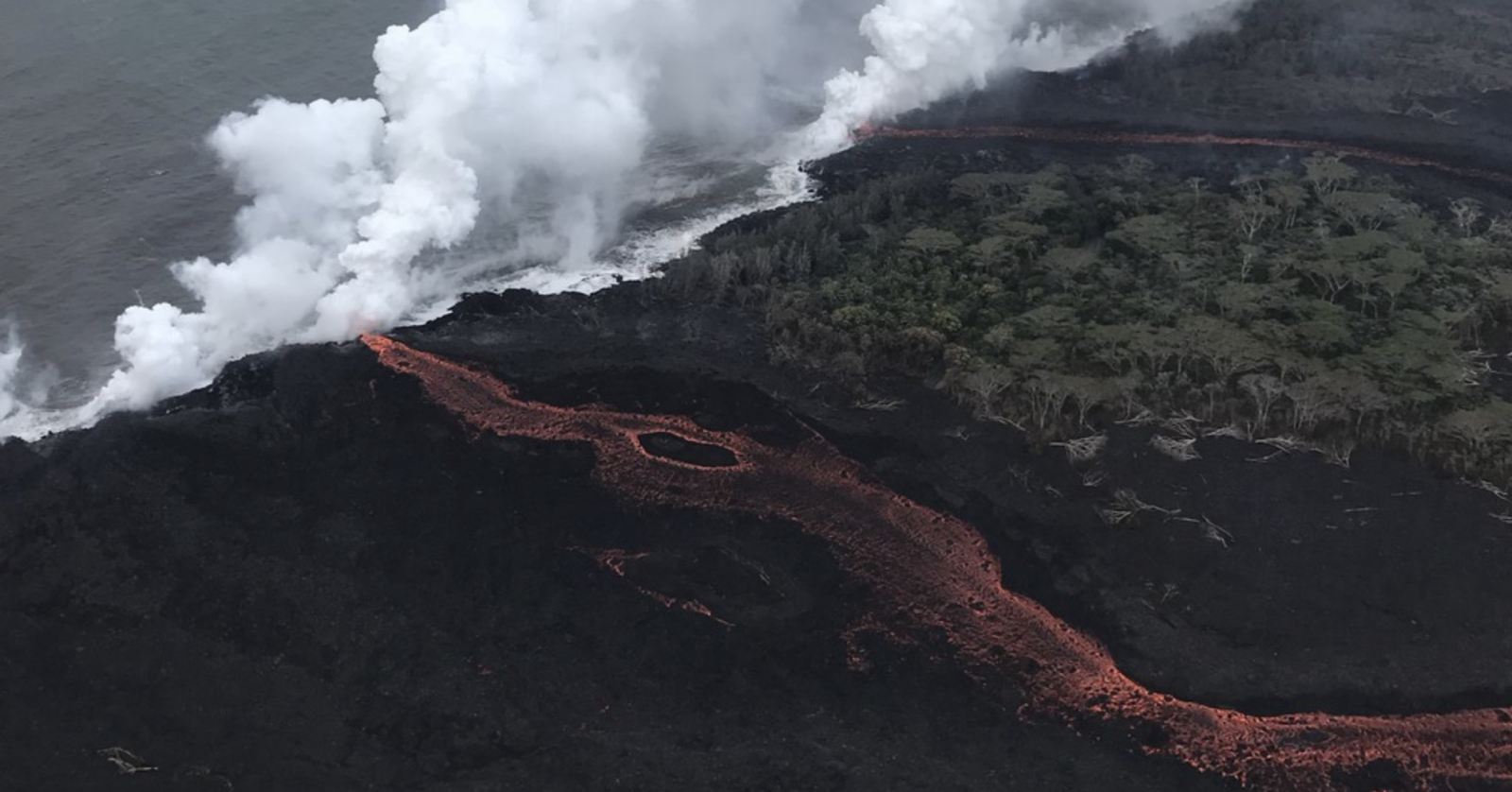 While the rift eruption in Leilani Estates has been taking place, unusual activity 15 miles away at Kilauea’s summit has also attracted widespread attention. At the same time as the lava outbreaks in Leilani Estates commenced, the lava lake within Halemaʻumaʻu Crater in Kilauea caldera began to rapidly drain away, leaving an empty hole in its place. The lava lake dropped more than 1,000ft over the coming days, leading to concern that the lava lake may lower below the water table in the surrounding land - an equation which created unusually large ash explosions in 1924.

Eruptions of ash, some reaching 12,000 ft into the atmosphere, began occurring as the loose and exposed walls of the former lake column began collapsing onto the lowering lake surface. These eruptions were spectacular in appearance to spectators near the volcano, but they were not indicative of water table intrusion. Then, in the early morning darkness of May 17, a significantly larger eruption blasted ash and rock particles up to 30,000 ft into the atmosphere - doubling the size of the former lava lake crater. Fortunately, Kilauea’s location on the southeast coast of the Big Island and the presence of larger Mauna Loa nearby has prevented the ash fall from affecting any areas outside the Puna District, but residential areas near Kilauea caldera have been blanketed with thin layers of gray dust.

Halemaʻumaʻu Crater’s lava lake continues to remain out of sight as of this writing, and periodic eruptions of ash are continuing. Water table intrusion, if it has not already occurred, may potentially lead to explosive ash emissions similar to the eruption on May 17. Kilauea’s explosive eruptions are significantly smaller than eruptions from stratovolcanoes such as Mount St. Helens, but past eruptions on Kilauea have hurled massive boulders 10 ft in diameter nearly a mile from the crater rim.

The future of the 2018 Kilauea eruption is a guessing game at this time. Many historical rift zone eruptions like the current one in Leilani Estates fizzled out after a few weeks, while others may continue erupting lava for a year or more - creating hundreds of acres of new land along the coastline. The following USGS map shows the scale of the eruption relative to the Big Island, as well as an illustration of the areas that have been covered by new lava flows. 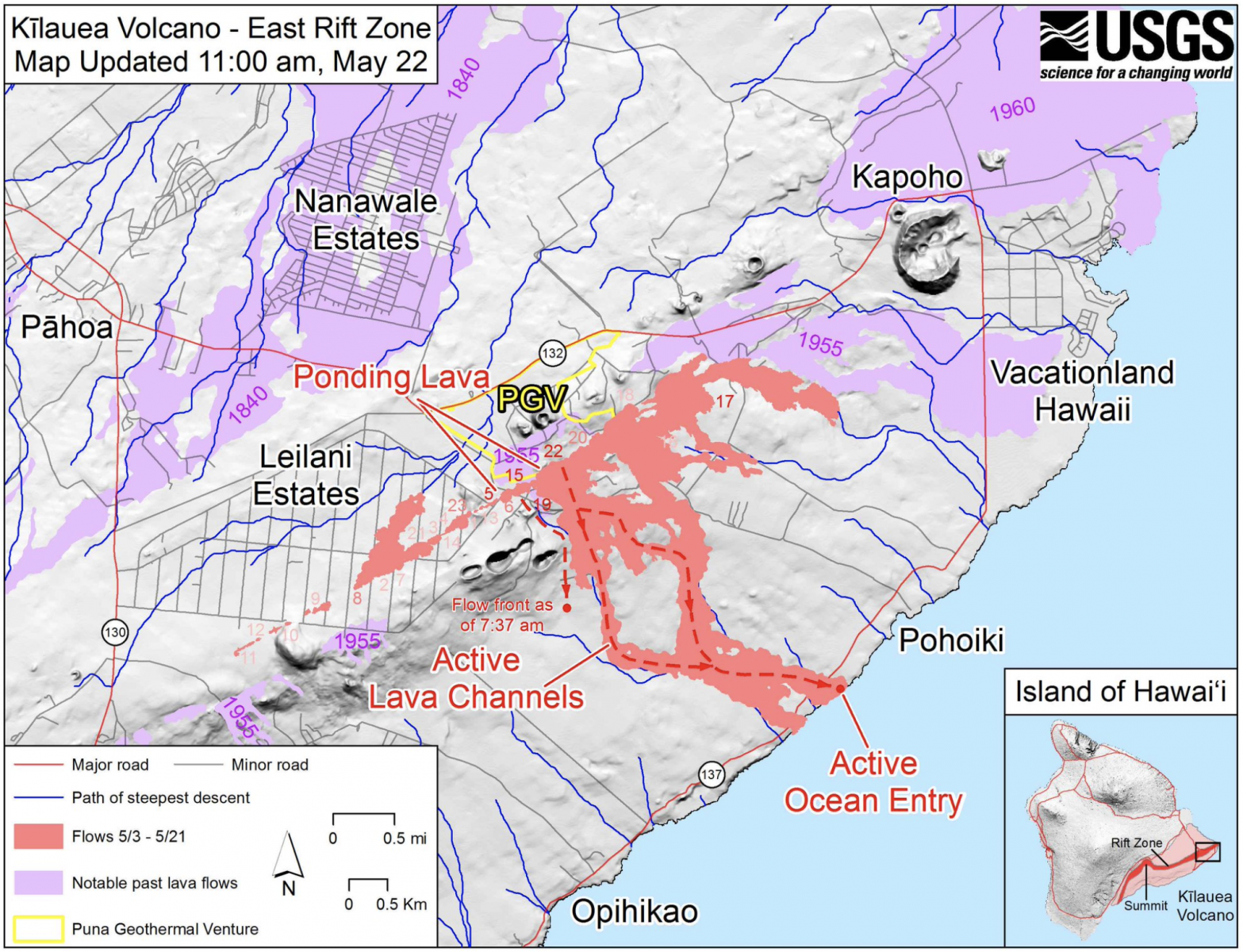 Due to Kilauea's location on the Big Island, the cities of Hilo and Kona, as well as the entire Kona and Kohala coastline, are well away from the hazard zone and not directly threatened by Kilauea's eruptions. The trade winds, as well as the blocking affect of Mauna Loa mountain, have kept the skies clear and crisp across the majority of the island.

(Images and graphics used in this article originate from volcanoes.usgs.gov - courtesy of the USGS)